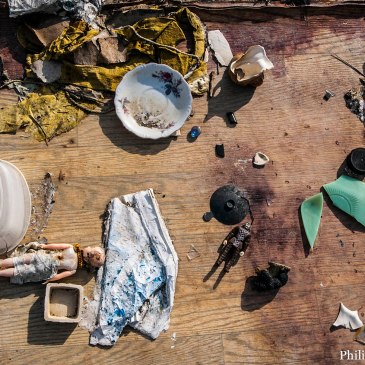 On my return trip from Springfield during the spring of 2013, I chose to travel south on Illinois 127 since I had explored US 51 on earlier trips. The two roads parallel each other heading south and eventually converge at Cairo (pronounced “Cay-ro”).

I was north of my destination when it began to get dark and I noticed a problem, my headlights were not working correctly.  Now, it is both startling and frightening to see the highway go completely dark in front of you , but I quickly figured out a fix for the problem.  A simple flip of the switch to high beam and back and everything worked like it should.  But eventually the low beams were gone completely, so in order to reach the next town (Cairo) I drove in using the high beams.  Luckily, I avoided law enforcement and after a short trip through the Illinois night, my first hint of what lie ahead came in the form of a lovely unincorporated suburb, ironically called Future City.  And then I saw the massive flood gate and quickly passed through the tunnel under the levee and into what was once downtown Cairo.  Even in the dark, it was worse than I had thought and the words of my older brother Bill kept running through my head, “There is nothing in Cairo”.  He was right, there was no economic base, at all. Nothing. The hospital had closed years ago and most of the long abandoned business district was either collapsing or gone.  There was no life to the place, but I did find 2 hotels and thank God for small miracles, one was a Days Inn.  The room was nice, and so were the people, but there was a disturbing lack of exterior lighting around the place. And quite honestly, the whole town was like that, Cairo was a very dark and unwelcoming place.

After eating what they (the hotel) called a “continental breakfast”, I left to check out the town, hoping it would look better in the morning light. It didn’t. Deep down inside, I felt a little guilty, not enough to walk away without images, but I kept a low profile. This place is photographed a lot, so I was trying to be a little more discreet than usual. Following my second attempt at breakfast, this time at the local diner, I ventured out toward the southern end of town.

While parking to get an image of the A1 Used Cars sign, I happened to look down at the ground. It was littered with an unusual assortment of discarded “stuff”, remnants and remains from a yard sale or thrift shop that might have once happened on the spot. I had finally found a view of Cairo that no one else had ever seen. 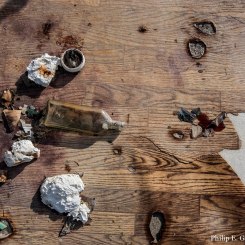 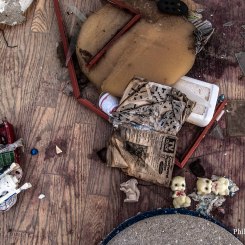 As I walked along framing and shooting, I took notice that each vignette I found was completely different from the others. One would feature an old bottle or piece of china, another resembled a desktop, complete with a broken Santa Claus head. R2-D2 was also in the mix, along with a Planet of the Apes figure, a be-headed St. Francis statue and a small plastic squirrel. Another aspect of these “snapshots” was the fact they were resting on an old building foundation, which added a unique surface/background to each one.

My unintended stay in Cairo was something to remember, to say the least. It’s not really a place I would ever want to spend the night again, unless I absolutely had to, but I’m no worse for the experience. To be honest, apathy and a complete lack of hope seem to define the day-to-day emotional state of Cairo, Illinois.

I do feel sorry for the people who live there, because there is not much to look forward to. They seem to cringe every time they see someone with a camera or hear the words “I’m a photographer”, and it should not be that way.

The sign said it all, 13 miles until I would exit US 49 and begin another highway exploration through the back roads of Mississippi.  I always feel a bit of excitement as I leave the main highway that got me there and the run begins.  A run, as I call it, is the driving, exploring and photographing along a planned route of highways and back roads.  And besides a good road map, extra camera batteries and memory cards, the most important item I carry during a run is my notebook.  And a few extra pens.

This is where I keep track of every state, town and county that I travel through during the run.  It is also the place I mark down the locations of my image captures, giving me a written diary of where I went, what I shot and how I got there.  I also jot down reminders to myself, notes about places I’d like to come back to and anything else I don’t want to forget.  For both my style of photography and record keeping, this kind of note-taking is absolutely required.  If only I had been this disciplined during my high school and college days.

I started a new series of runs through the southern landscape during the spring, but I was not finding what I was searching for.  Not because of a lack of talent or inspiration, it was really about the choices concerning the routes I had taken.  I did not put myself in those areas that would have the roadside environments I so desperately sought.  However, towards the start of the summer, specifically, on Monday, June 16th, I finally found myself in a place that I could make a real run through.  I was going to be returning to Birmingham from a family reunion in Long Beach, Ms, which is a fairly cut and dry trip if taking the interstate.  But I don’t find a whole lot to stop and photograph going 75mph.  So I mapped out a nice run along the back roads, going through some territory I had never been through, and the exit at Wiggins was the starting point.

As I rolled through the warm and humid Mississippi landscape, I began to realize I was in the midst of a good run.  I felt as if some of my earlier frustrations had began to lift and did not feel like I was pushing or forcing myself to find images.  The only thing I had to do was pay attention, stop the car and do what comes naturally with my camera in hand.  But there is a little more to it..

My roadside environments are obviously found while searching the highways and back roads, and some might even call my work documentary style, but that is a long way from the truth.  My work does not come from the “anytime and anyplace” snapshot mindset, it’s not coincidence or a random event.  My imagery is about a very precise intersection of time and place, capturing a unique environment through both light and composition.

I have had an eye for roadside imagery since my time at the University of Montevallo, but it was not such a dedicated part of my portfolio like it is now.  I have often made the comment that all of us in the UM art department at that time were influenced in some way by the photographs on the front and back of REM’s “Murmur” album.  The landscape engulfed by kudzu was something we walked by or drove through everyday, it did not exist “somewhere else”, it was right in our backyard.  And the experience from that time period in my life is something I still carry with me to this day.  Although most of my work recently has been done along the back roads of  Illinois, my “southerness” still manages to show through in the way I interpret the scenes.  And that is something I am very proud of and I hope will never change.